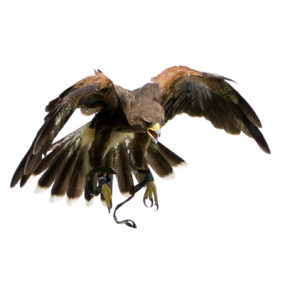 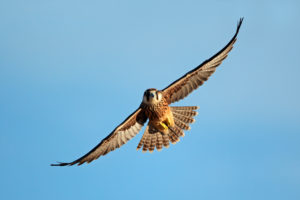 The Harris Hawks are medium in size and agility. These can be used for example against pigeons in city centres. These birds are naturally gregarious and are sometimes flown in pairs for greater effect. They can also be used to fly in low to get birds such as seagulls airborne before then sending in higher flying falcons to get the pest birds to disperse right away from the area.

Normally the predator birds will be flown in the daytime at a stage where they are keen to fly i.e. not so hungry that they prey on one of the pest birds and then just eat it, but not so replete that they just need to sit and digest their food. However, hawks have been trained to fly at night and follow a torch beam to pick off individual birds from their perches.

Contracts usually involve an initial intensive clearance period, followed by ongoing routine visits.  Predator birds can be used in conjunction with other pest bird management techniques. Distress calls and/or dummy predator birds can be used to reinforce the scaring when the live predator birds are not being flown.  Proofing is recommended to help eliminate heavy pressure areas; and culling might be useful in eradicating the last few determined birds from an infestation.