Many species of bird have a ‘distress call’. These are sounds that the birds transmit only when they are being attacked by a predator – they are not the same as alarm calls, which might be given on sighting a predator. Generally alarm calls just alert birds rather than dispersing them. Distress call scaring systems have a recording of the distress call of the pest bird, which is played back through a loudspeaker, or series of loudspeakers. 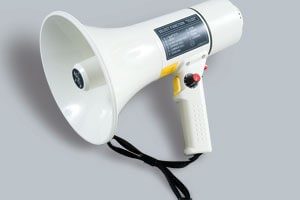 Broadcasting distress calls elicits different reactions in different species of pest bird. Social and aggressive birds that communicate verbally within colonies, such as gulls and corvids, would usually fly towards the source initially to see if they could mob the predator and help their kind. When the call ceases and they do not find a predator they are then unnerved or ‘scared’ by the possible danger and disperse. Birds that do not communicate much verbally, or do not have bills or claws to threaten predators, such as pigeons or starlings, will tend to stop and assess the situation, then disperse directly. The best results are likely to come from the distress call of the actual pest species causing the problem, though closely related species’ distress calls can also evoke a response. 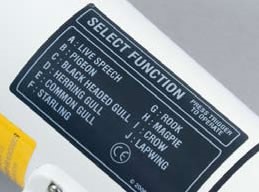 When social birds are dispersed using other scaring techniques such as loud noises, they generally do not fly far away. They would normally just settle on the nearest safe perch, which might be quite close to the area where they are causing a problem. With use of distress calls, they generally tend to move further away from the call source and the entire uncomfortable area.

Natural bird distress calls played back at a natural sound level are not intrusive to people and often remain unnoticed in places where the public are present.

Systems normally comprise a base “control” unit and a number of external speakers.  They come pre-programmed with a number of species distress calls.  Some are programmable to allow the duration and timing of distress calls to be controlled.

There are systems on the market that supposedly scare birds using ultrasonic ‘sounds’. However, in general birds have similar hearing abilities to humans , so birds would not be able to hear them. Thus, ultrasonic sound generators have little or no effect in dispersing birds.

Unfamiliar loud noises, such as clapping, banging, whistling or wailing will usually move birds the first time they hear them. However, loud noises used repeatedly will have limited effect as the birds soon become habituated to them and ignore them when they discover the noises will not harm them. A loud noise similar to a gun firing can be effective in agricultural situations though, where it is backed up with people with real guns shooting some of the birds.